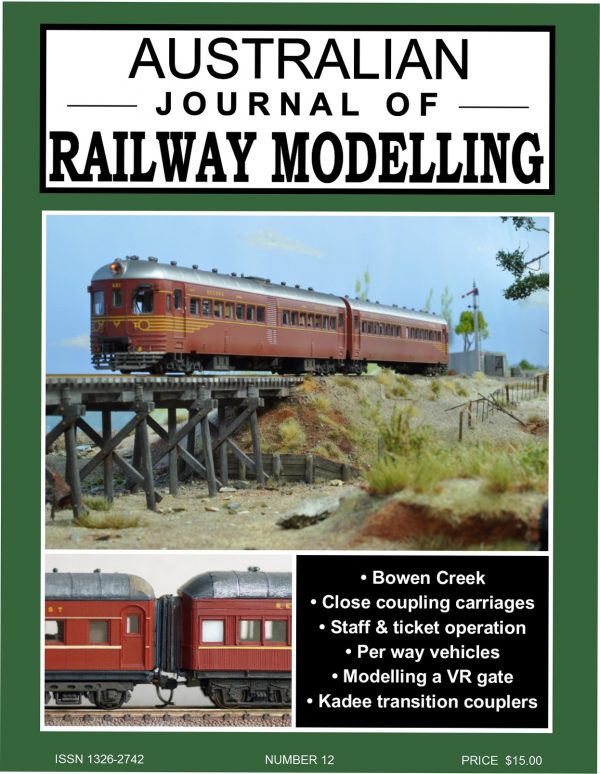 POINT OF VIEW – The closer we get ….The importance of Australian exhibition layouts – SEAN HARRISON

BOWEN CREEK – Bowen Creek is located somewhere along a planned but never built line in the central west of NSW.  It is the first exhibition layout in Australia to be built to Proto 87 (P87) standards.  ANDREW CAMPBELL and IAN MILLARD describe their thinking behind the design and construction of this layout.

TRANSITION LINK KADEE COUPLERS – ALAN TARRANT describes how he converted a Kadee coupler so that it could couple with the hook couplers on the front of his small brass locomotives.

MIND THE GAP! – When most model passenger carriages are coupled together there is an ugly gap between adjoining gangway connections.  IAN BLACK shows how pivoting gangways can be added to ready to run and kit built carriages to overcome this problem.  He then looks at springing as a way to improve the performance of pivoting gangways and also describes a simple method for making adjustable coupler mounts to allow the distance between carriages to be fine-tuned.

BUILD A VR YARD GATE IN BRASS – The Way and Works Branch of the Victorian Railways produced standard drawings for five different sizes of gate – all of them constructed in a similar way.  GLEN NEWBY describes how to build an HO scale standard 18′- 6″ gate from brass strip.  His techniques can be used to make any sized gate of this type.

NSW TRACK VEHICLES 1950 – 1985 – STEPHEN OTTAWAY provides an overview of the different types of track vehicles used by the NSW Railways from 1950 until the effective demise of these once ubiquitous red vehicles around 1985.

SAFE WORKING ON THE LAYOUT WITH AN ORDINARY TRAIN STAFF AND TICKET SYSTEM – PHIL COLLINS describes how he added staff and ticket safe working to increase operational interest on his branch line.

VARIATIONS BETWEEN STAFF BOXES – The photos over the next two pages illustrate some of the detail that can be modelled on staff boxes. They also show the many differences between boxes at different times and in different locations.

CROWD CONTROL AT EXHIBITIONS – Almost invariably there is some sort of physical barrier between layouts and the public at exhibitions.  ROY WILLIS looks at the different types of barriers that were on display at the Epping Model Railway Club’s 2019 exhibition at Rosehill.  Some exhibitors brought their own while others relied on barriers supplied by the club.  With one exception, all followed the same basic principles.

SIT ON THIS INSTEAD – STEPHEN OTTAWAY enhances the appearance of a Uneek ‘1920s’ type station platform seat.

USING PAINT AS A FILLER – Most modellers have used a filler of some kind to eliminate gaps where two kit parts are joined together.  As DAVID LOW explains, filler primer is a type of spray paint that can be used to fill shallow gaps where it is almost impossible to use a thin layer of conventional putty.