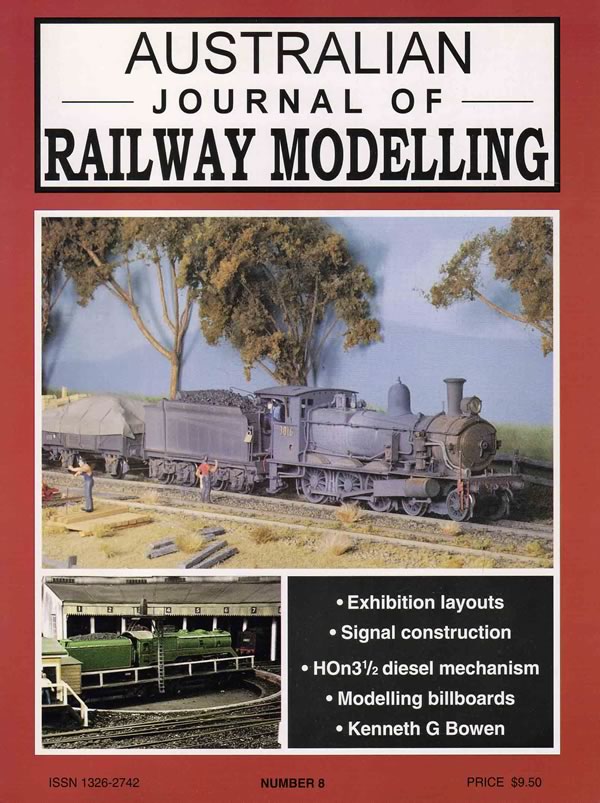 BASEBOARDS FOR EXHIBITION LAYOUTS – Rodney James describes the baseboards for his new exhibition layout and explains the reasons behind his design.  Many of these ideas can be applied to any layout.

IT PAYS TO ADVERTISE – Allan English makes an advertising hoarding appropriate for the NSW steam era.

SIGNAL TERMINOLOGY – The components of a semaphore signal are not easy to describe because the same part often has a number of alternative names.  To avoid confusion when explaining how to build the model on the following pages, the terms below, based on a NSW drawing are used to describe the various parts of a signal.

STANDARD CONCRETE SIGNAL BOX – Signal boxes built from 15” wide pre-cast concrete slabs were used extensively in NSW during the first half of the 1920s.  To accompany the detail photos, Kim Armstrong has prepared a plan while Bob Taaffe lists the places where they were built.

NARROWING THE ATHEARN SD9 BOGIE TO 3’-6” GAUGE – Obtaining suitable mechanisms has always been one of the difficulties for HO n3 ½ modellers.  The Athearn SD9 has a bogie wheelbase reasonably close to that of the Queensland Railways 2170, 2350 and 1550 classes.  Paul Blake shows how to adapt these Athearn power bogies to 12 mm gauge.

THE MODEL RAILWAY OF KENNETH G BOWEN – Kenneth George Bowen was probably best known for his outstanding pencil sketches and watercolour paintings of railway subjects.  However, he was also an avid modeller with and extensive ‘3 rail’ O gauge model railway under his home.  Bob Stack recalls the layout which Ken began at a time when modelling NSW prototype meant that virtually everything had to be scratch built.