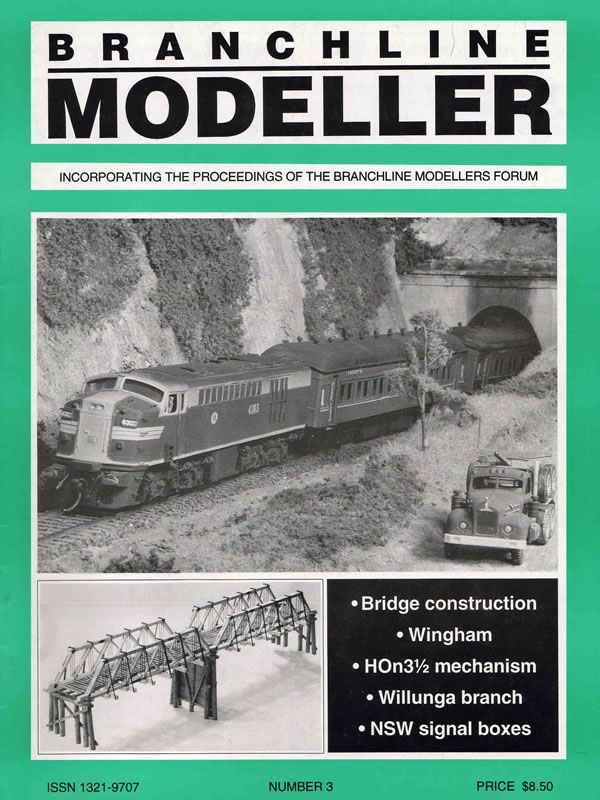 WINGHAM – Rodney James has built two exhibition layouts based on NSW prototype.  The first, Crafton featured a freelance station with large marshalling yards and a loco depot.  With the second layout came the opportunity to improve on the design.  Wingham took a different approach with the emphasis on trains running through rural scenery.  It also presented the challenge of researching and modelling an actual location.  This article describes Wingham and some of the planning that went into this popular exhibition layout.

A NARROW GAUGE LOCO MECHANISM – The AR Kit Co. 45 class power bogies are easily converted to narrow gauge.  This makes them ideal for powering Hon3½ locos, albeit those with a wheelbase falling within a limited range.  Ian Storrie describes the conversion and shows how to make minor alterations to the wheel spacing.  Included are details of a generic chassis which will allow the bogies to be mounted at different centres.

RESEARCHING A MODEL RAILWAY – After moving to South Australia, Les Fordham decided to build a model railway following S.A.R. practice and based on a prototype location.  He looks at the different sources of prototype information available and shows how they were used in the design of his layout.  Apart from building a more accurate model, the information collected gave even greater satisfaction by allowing him to operate the trains prototypically.

HOWE TO BULD A TRUSS BRIDGE – The first issue of Branchline Modeller contains a prototype plan and detail photos of a half through Howe truss bridge.  Kim Armstrong describes how to build and detail the bridge using available parts.  He illustrates many of the basic skill and techniques used by modellers when working with timber.

16 MILES TO GRIFFITHS BROS TEAS – Griffiths Bros. Teas signs were once found beside railway lines all over South- Eastern Australia.  What was their significance?  Big Bad Bob looks at them as a detail item for the layout as well as a collectable to decorate the train room.

S IS FOR SUPERDETAIL – There were several distinct variations within the large group of wagons known as composite S trucks.  James McInerney shows how to modify and superdetail proprietary S trucks to resemble the major variations within this wagon class.  To simplify the task he has produced a detailing kit which he has made available to readers of Branchline Modeller.

FIDDLE YARDS- WITHOUT FIDDLING – Les Penrose describes how some simple electronic components can be used to make a route selector for a fiddle yard.  With the press of a single button the correct sequence of points for each road can be set.

WEATHERING TIMBER VANS – Following on from his article in the first issue of Branchline Modeller where various water based weathering techniques were described, Phil Paige paints and weathers the Trainorama MRC refrigerated van.