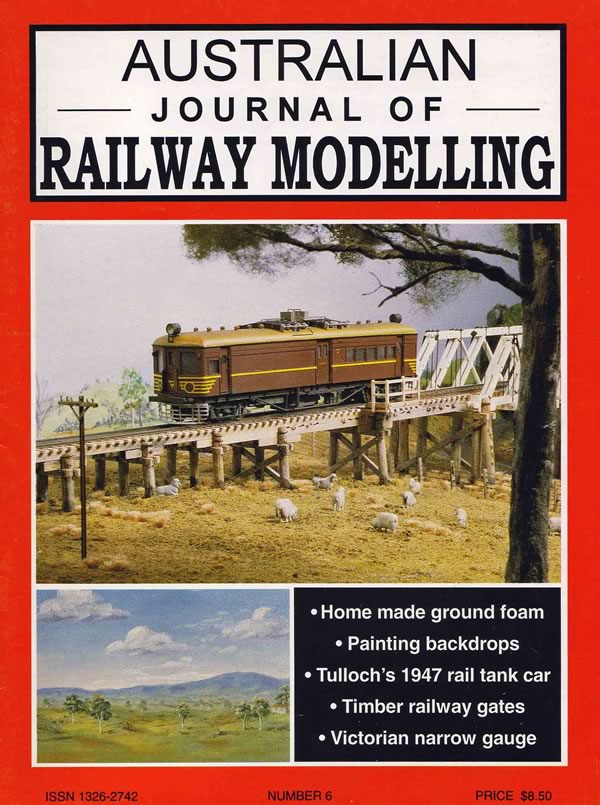 POINT OF VIEW – When less is more.

FOAM AT HOME – Ground foam is a widely used and versatile scenic material, suitable for representing all types of vegetation in model form.  Neal Sievwright describes how you can make it yourself.

SOLDERING WHITEMETAL – Because of its low melting point, many modellers are intimidated by the thought of soldering whitemetal.  Soldered joints however, are stronger and neater than those made with glue.  Andrew Stevenson explains how to solder whitemetal, showing it is not that difficult.

TULLOCH’S 1947 TANK CAR – Howard Armstrong introduces an interesting group of twenty one rail tank cars that a number of different oil companies operated in NSW.  He then describes how to model them.

MAKING A POINT – Over the years there have been many articles describing how to scratch build turnouts.  Generally, they focus on producing functional turnouts which both look better and operate more reliably than their mass produced counterparts.  Stephen Ottaway shows how to build turnouts as detailed scale models.

BEHING THE SCENE – A painted landscape behind a model railway creates the illusion that the model is part of a much larger scene.  Deidre Morrison describes the basic principles and techniques used by artists, and demonstrates step by step how to paint a realistic backscene.

CUTTING CURVES – Ian Storrie describes a simple tool he made to cut curved strips of styrene.

WALL CLOCKS OF THE NSWR – Big Bad Bob has found another item to hang on the wall of the train room.  Resourceful modellers could use the information to detail the interior of their railway buildings.