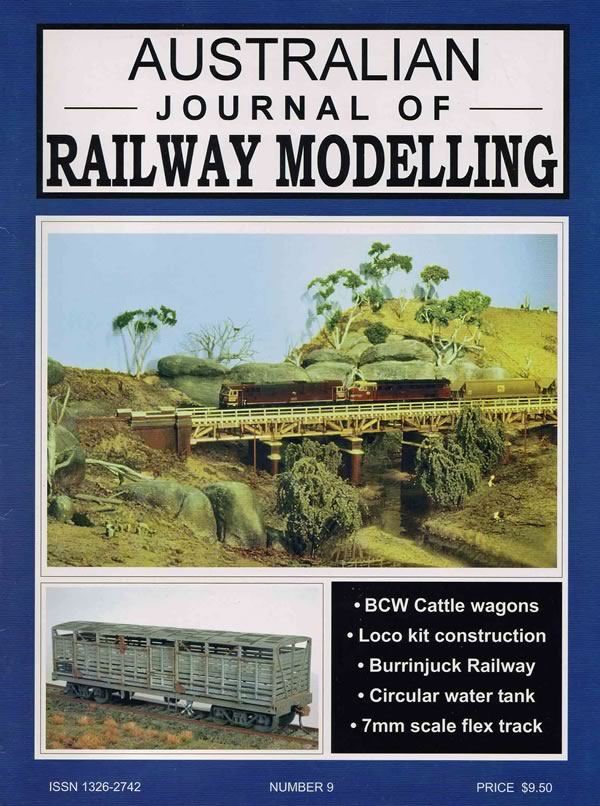 POINT OF VIEW – Getting what you want

BULD A CIRCULAR WATER TANK – Bruce Heinzel describes how he built a model of the 20,000 gallon circular water tank at Meranburn.  At least eleven tanks of this type were built around NSW on new lines constructed in 1892-93.

ASSEMBLING WHITEMETAL STEAM LOCOMOTIVE KITS – PART 1 – Whitemetal kits of Australian outline steam locomotives have been available for many years.  Originally produced locally by Protype and FSM, more recently they have been imported from the UK by Footplate Models, Broad Gauge Models and Colonial Models.  Phil Calvert describes some of his techniques, including changes to the manufacturer’s instructions to assist in the construction of these kits.  Using the Footplate Models D53 kits as an example, this part covers general preparation and assembly of the tender.

THE RAILWAY TO BURRINJUCK DAM – When completed in 1929, The Burrinjuck Dam was the second largest water reservoir in the world.  A 2’0” gauge railway was the key to its construction.  Raymond Doyle tells the story of the narrow gauge railway which ran for 21 years.

BOGIE CATTLE WAGONS OF THE NSW RAILWAYS – Arthur Smith describes the features of different types of bogie cattle wagons used on the NSW system.  Even though they were all BCWs, the different batches of vehicles given this code varied significantly.  The introduction of new vehicles and withdrawal of old ones changed the proportion of the different wagons in the class over time.  This is a consideration for those seeking to accurately model a particular time period.

A ONE-NIGHT GRINDING WHEEL – Small projects that are completed in an evening are a great way to get a real feeling of achievement.  Stephen Ottaway describes one such project that can be used to detail a fettler shed scene.

THE 10 000 GAL DEFENCE DEPARTMENT TANK CAR – Howard Armstrong describes an interesting group of 25 tank cars built for the Defence Department during the Second World War.  After the war they were sold and representatives of this group could be found in the tank car fleet of every company operating at the time.

ENHANCING THE MINI MODELS BCW – Mini Models produce an injection moulded kit representing the internally braced 1959 type BCW.  Stephen Ottaway shows how to improve the appearance of the underframe on the kit and also converts it to and outside braced version.  The model has been weathered to represent a vehicle close to being condemned.